Last week, we had a very exciting delivery through the post- seeds from space! Daniel spotted the RHS Campaign for Gardening was giving away seeds that have been taken up to space by Tim Peake.

In September 2015, 2kg of seed was sent up to space to the International Space Station and stored there until Spring 2016, when they returned to Earth. They now have been distributed in packets of 100 to schools around the country to be grown alongside control seeds. There is a packet of 100 red seeds, and a packet of 100 blue seeds. We’re not sure which seeds are control and which have been to space, so the experiment is to see if, when they grow, a difference can be seen between space seeds and Earth seeds!

We have seeds from one of those packets! Actual space stuff!

As according to the instructions, we planted the seeds (thematically, rocket seeds) in boxes of soil, gave them a good water, and filled in the poster we had to record our results on. At the moment they’re being kept in the soon-to-be new library, but will be moved to East and West classrooms in due course, to be monitored by visiting schools and staff.

Carefully brushing the soil over the seeds

So what’s the point of it? Well, the experiment will show whether seeds are affected by being stored in space- which will be vital to know if we want to grow seeds on other planets one day. There’s a rigorous method that we had to follow so that our experiment is the same as everyone else who’s planting them. For the students planting seeds, this is a great opportunity to learn how to follow methods and justify why things are being done the way they are.

Every few days we have to count how many seeds have germinated, and measure the height. At the end of the 6 weeks that the experiment is running over, our data will get put into a national database, and the results can be analysed. This data will be published to the public as well, which is very exciting. 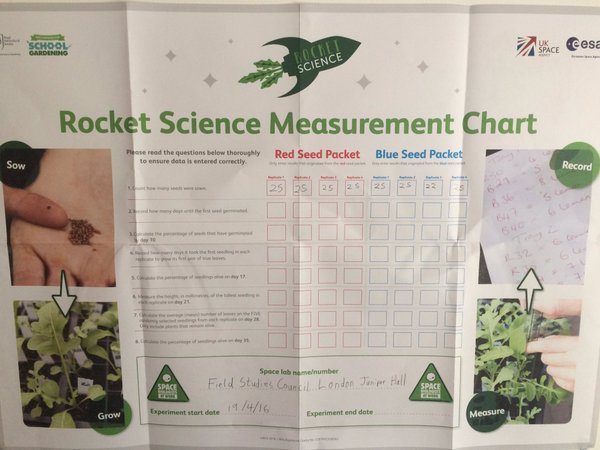 The first few seeds have germinated already, so we are busy watering and waiting for the rest to sprout as well. Hopefully they’ll soon grow big and we can see if there are differences between the two packets!