We had Real Family Holidays in on the 7th-10th April, one of my favourite times of year! The activities have been great fun, with some returning families from last year. Sunday morning was wild art around the grounds of Juniper Hall, and there were some excellent creations to be seen. 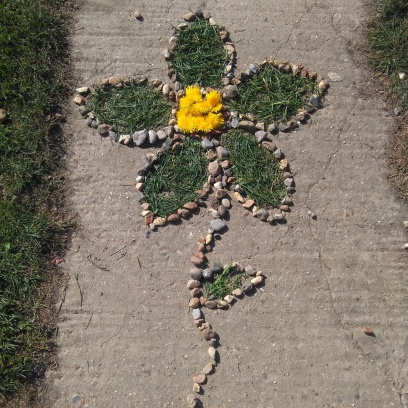 There were lots of inventive uses of natural materials collected from around the grounds. A mixture of stones, green leaves, a few flowers and sticks and twigs.

Gather round to enjoy everyone’s creations

Spring is definitely on its way, with a delightfully warm weekend- barely even coat weather! We’ve been writing up our Spring Index here like last year to calculate when spring is starting. Last year the average index (which is across all the FSC centres) was the 26th April, which was the same as 2015. I think this year it might be earlier though, as we’ve already recorded quite a few early indicators!

We look primarily at 4 indicator species, although we’ve also been recording others as well- and important events such as first lunch outside (11th March), and first time wearing shorts (13th March). The 4 big ones though;

Last week brought the first house martin to Crossways Farm as well on the 31st March, an exciting spot by Jack on the coach back from the river. I got my first swallow yesterday on the 3rd April, although up in Hertfordshire, not in our area for the Spring Index, so the competition’s still going for the first spot for us in Surrey.

We’re still waiting for our horse chestnut and hawthorn, but no doubt they’ll be on their flowering way soon. The warm weather today rewarded a pair of slow worms under the reptile mats. No mammals, but the bees were flying from the apiary down in the meadow as well, despite the grey clouds.