The Mickleham Scrub Bash, organised by the National Trust, took place on Wednesday the 17th of February. Overall, around 80 people gave up their valuable time to pitch in and volunteer. Local members of the community, National Trust workers and volunteers, and local organisations (including Juniper Hall) turned out in force to support the brilliant work being done by the National Trust. From Juniper Hall, myself, Denham (Placement student), Jack (trainee tutor), Sarah (head of Grounds) and regular volunteer Sam headed up to the Mickleham Gallops for a day of hard work.

Predictably, the weather was overcast, and nothing more than about 8 degrees – a classic British Winter day. To give you a flavour of the sort of work that we were doing, volunteers cut down trees, loaded up the bonfire, transported tree trunks, and did some brush cutting.

So, conservation projects such as these are necessary on the Mickleham Gallops for a number of reasons. Firstly, on the top of the hill lies a former runway which is unnaturally straight, so one objective was to break up the carefully crafted lines of scrub that live either side of the old runway. Secondly, dogwood is an invasive species, and in order to improve biodiversity on the Mickleham Downs, the removal of this species is important to improve grassland habitats. All of the cuttings were then burned as it would have required more energy and resources in order to dispose of them in a different way. All hard but worthwhile and rewarding work!

Here are some images from the day:

All in all, and I think I can speak for the rest of the JH team, we had a brilliant day (despite the odd scratch from rose thorns)! The atmosphere was friendly and the cake turned up in abundance; the highlight for me were the home made rocky roads. It was great to meet people from the community who are really passionate about their local environment, whilst also meeting National Trust volunteers who part take in this conservation work day to day!

Thank you to all that organised, it was a pleasure.

It’s been a really busy week, so I’ve only just managed to get round to writing about this now! Last weekend, from the 26th to the 28th February, Ruth and myself travelled to Orielton Field Centre for three days of training in our Lowland Leader Award. It’s about a 5 hour journey to Orielton by car- to use their tagline, it’s not as far as you think! It wasn’t too bad in all honesty. The worst bit was that we had decided to travel over that morning, so we found ourselves with a 5am wake-up call. 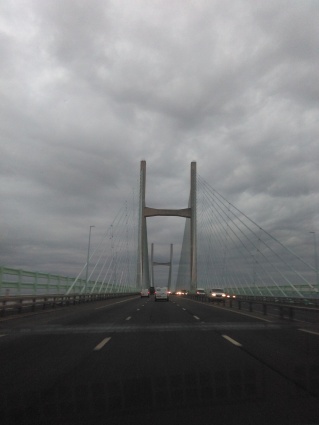 7am at the Severn Bridge

Obviously, the instant we got to Wales it started to rain, but by the time we had got to Orielton (which is in Pembrokeshire), it had amazingly stopped! What was this, a weekend in Wales and no rain?! Somehow, the impossible came true, and we had barely a speckle of rain at all.

After being introduced to the course, the first thing we did was plan our walk for the afternoon with trainer Chris. Tom and Steve had come over from Dale Fort Field Centre (about a 45 minute drive from Orielton) to also attend the course, and knew the area much better than we did, so suggested we went for a 6km walk around Stackpole. There was a picture on the wall of some of the coastline, but it was even more amazing than it looked in a photo. 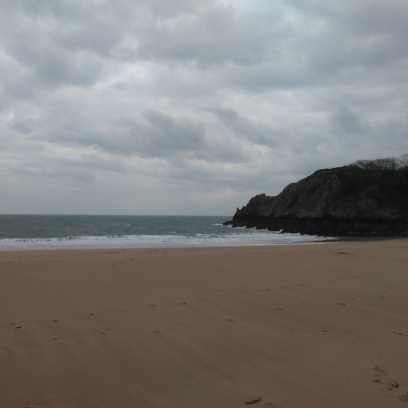 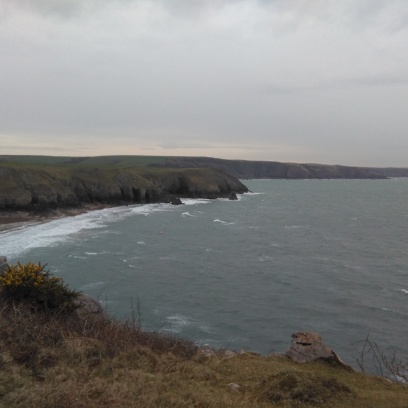 Orielton are really lucky to have perfect coastal formations right on their doorstep. It’s very different to the Dorset coastline I got used to living by the sea for a few years. Also fantastic, the birdlife we saw- a kingfisher, goosander and (most excitingly), a pair of chough perched on the clifftops.

Returning to Orielton, we planned our walks for the next couple of days, up in the Preseli Hills. We chose a slightly longer walk for Sunday of 9km, and a walk up the highest hill in Pembrokeshire on Saturday, to the top of Foel Cwmcerwyn. Most of my photos from Saturday are on my camera (perhaps I’ll upload them another time), but I have a few from Sunday, when we went for a walk to Carn Ingli, an old hill fort with spectacular views. 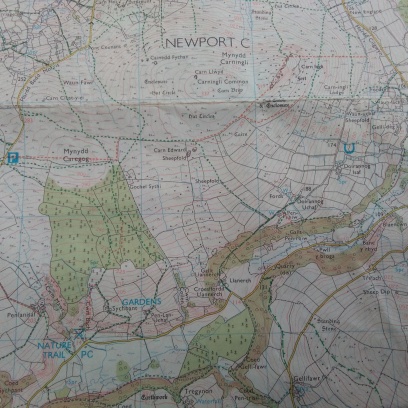 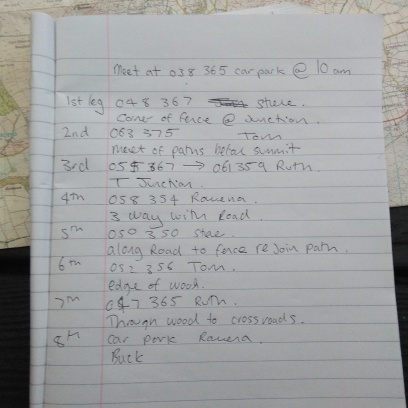 I’ll let the photos speak for themselves, as it was amazing to see. The weather was perfect- very cold, especially being up high, but so clear you could see over to the mountains in north Wales. 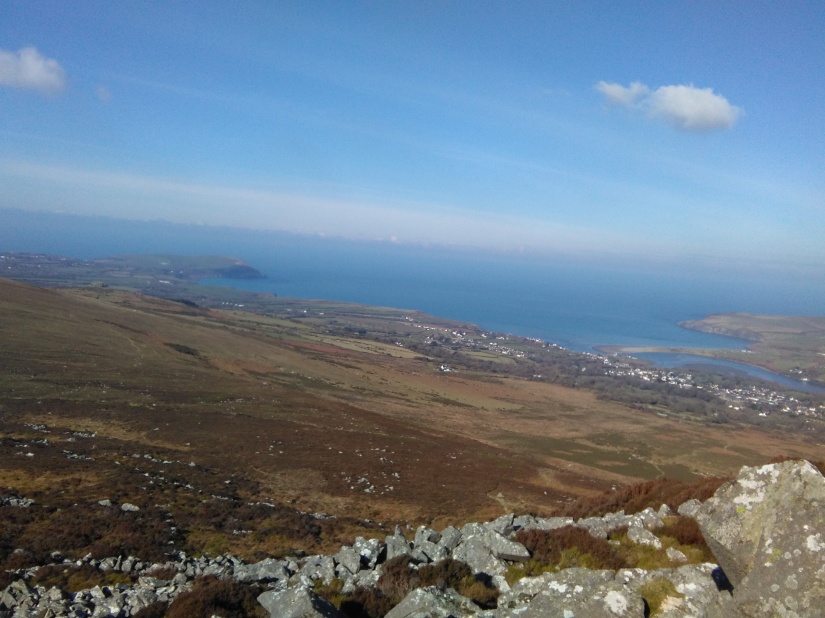 Looking towards Newport from Carn Ingli

Steve, font of all knowledge of the area, told us the story of Carn Ingli while we sat in a sheltered spot behind some rocks for a cup of tea before moving on. Who would want to live up so high?! 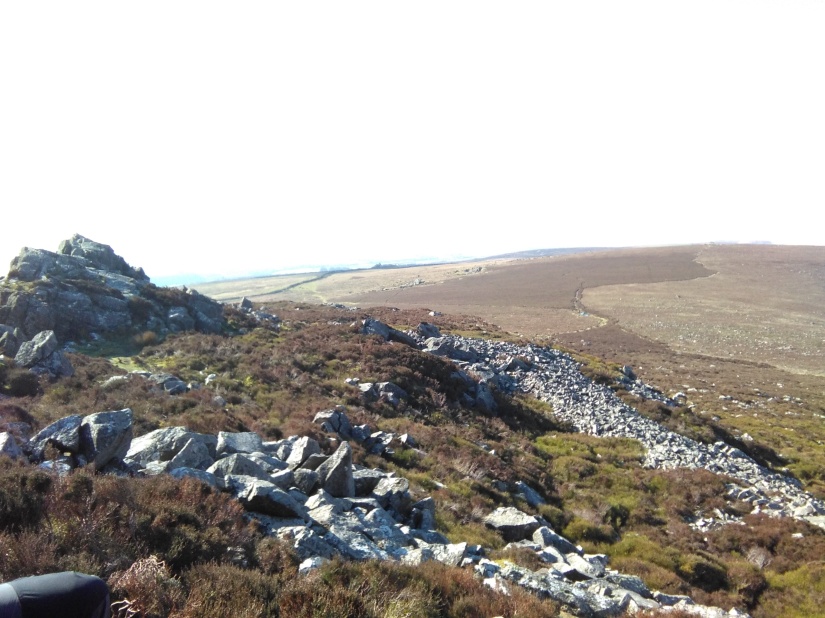 The weekend was really awesome, and I for one learnt a lot about how to plan routes, how to pace a walk and how to use a compass to measure distances. I’ll be putting my new knowledge to use when leading groups out back at Juniper in the future- there was lots of consolidating time on Monday to make sure I knew everything inside out on my 7 hour train journey back to Surrey. Thankfully, I had a spare hour before heading to Pembroke station to run and find a geocache local to Orielton though… 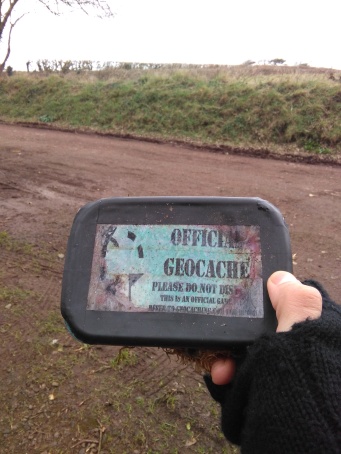